Warning: Creating default object from empty value in /home/content/04/4371104/html/words/wp-content/themes/platform/admin/class.options.metapanel.php on line 49
 Why Pie? | Words with Sox
Farewell to another friend Top 10 Surprises 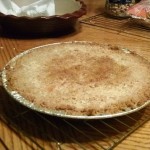 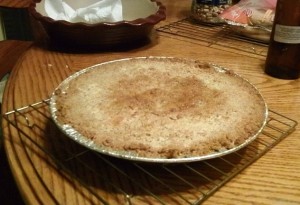 Of course this title could have been shortened by using mathematical homonyms but I figured it would be a pain to type in for a url.  I’ve been asked this question a few times.  I think it was the same person, so perhaps they have the memory issues I have.  Why pie? Well most people know the easy answer, why not. There’s more to it though.

Growing up I’ve always known that dessert was waiting at the end of every meal.  For my siblings dessert was a reward for finishing everything on the plate.  I had an easier time.  Being both a picky eater and the baby of the family, there are times when it would appear that any food I would eat was fine.  Actually there were some times that I wasn’t even interested in dessert.  Dessert was not only available but there were options as well.  “Ok… For dessert, we have cookies, ice cream, and Snickers ice cream bars.” Something like that tended to be said at the end of any meal.  And of course there were many times when all was well in the stomachular region and we chose to pass on the gastronomical addendum. Didn’t mean to feign intelligence there, back to the story

Cookies were a standard and tended to be the way I leaned.  All sorts of cookies.  I wasn’t really into chocolate chip cookies.  Definitely not Oreos. When I was little I remember very distinctly telling a friend that Oreos made me sick.  I don’t know that it was actually the case but somehow I not only convinced him, but also myself.  Favorite cookies? It comes and goes but many of the ones that pop up around Christmas seem to do quite well.  I can imagine that the nostalgia element is helpful there though.  Wait ok what was I talking about? Oh yeah, pie.

When going out to dinner I’d often get dessert.  Even if I was the only one eating.  Top choices were pie or cheesecake. For much of my life I’d go for cheesecake but that tended to be because pie was a crapshoot (is that a bad word?) as far as it’s quality.  Cheesecake started getting iffy too though.  So many places were just serving frozen cheesecake.  And I don’t mean that it had been frozen, I mean it was frozen when it hit the table.  Sometimes I could practically tell what kind of frozen cheesecake it was.  Sarah Lee French Cheesecake, yeah I know what you look like.  Jerks.  Pie started stepping up on the list.

Wait, no I’m not ready to talk about pies yet.  Milkshakes and floats.  As any New Englander can tell you, it’s never too cold for ice cream.  Milkshakes, definitely a favorite.  Well.. in the kind of milkshake as defined by most of the population.

– According to the website for England’s MicroCreamery (now closed) in Haverhill, Mass

Rootbeer floats, while easy to find up north, not so much in Virginia.  If for no other reason that there just isn’t a lot of rootbeer around.  It’s kind of Dr Pepper country down this way.  I started making them and milkshakes at home.  It was a good way to get people over to the house when I first moved in.  I had a lot of projects that benefited from having extra hands.  With nowhere else in town providing quality desserts, I had the market cornered.  And in general I think that those that came to help were glad to have the addendum to the work day.

And then there was Pi(e)

There are a few great desserts out there, in my mind, most of them are pies.  There’s the pies that you have at holidays like Independence Day, Thanksgiving, and Christmas. There’s the pies that you get from dive diners and such.  There are secret family recipes. And for some there are special restaurants that we know from growing up that just made great pies. I have several favorites depending on the venue, or the time of year.  There’s a long story that explains it all.  And you’re just going to have to wait until next time to hear it.