Often when I see trash, I pick it up.  It’s not easy, but for some reason we as a culture don’t seem to bother.  I actually have thought to myself at times “If I pick up all the trash I see, someone might lose their trash picking up job.”  Seriously? What’s wrong with me???

Earlier this week I was having a crappy day.  I was walking out of the building and there in the stairwell was a pink piece of paper.  I grabbed it and it turned out to be a torn piece of a post-it note.  I was going to take it and pitch it in the trash or recycling maybe but instead I had an idea.  I reached into my pockets to look for something but I didn’t have it on me.  So I walked back to my office and got what I was looking for.  A pen.

I started writing but for some reason it wouldn’t write.  It did that thing where ink doesn’t consistantly come out on a spot on a piece of paper. Not sure why that does that, but anyhow.  I grabbed another pen and after I shook it a few times I was done.  I walked out to the stairwell and looked for a place to put it.  The sticky part wasn’t strong enough so I just set it on a window ledge. There’s an architecture lab that is right by the stairwell so I figured someone would get it.

So then today I notice on facebook that a friend of mine posted a picture.  There was a note that he found.  It was on a post-it (untorn) stuck to the door of his building across campus a bit.  Makes me wonder… did I do this? Pretty awesome if I did… but still cool if it just was that someone else had the notion to do something similar. 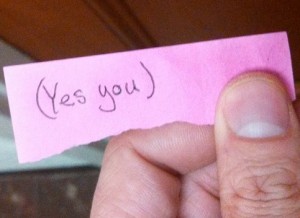 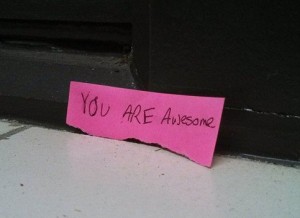 What do you think?

One Response to Trash Trick