I have gotten really into eating Lucky Charms lately. I think that they really are a excellent representation of what kids want in a breakfast cereal. You know what I mean, something that is advertised as a ‘part’ of a balanced breakfast. Often the other parts are juice, milk, toast. Now correct me if I am wrong, but I would think that milk and toast make up pretty much any of the nutrients in the cereal and milk. That’s not really the point to my banter today, but it is a good place to start.

The start of a beautiful friendship

What makes kids so lucky to get their hands on this cereal? The Charms! According to memory, originally Lucky Charms consisted of dehydrated marshmallows in several shapes (all the same flavor… sugar) yellow moons, blue diamonds, orange stars, green clovers, and pink hearts. According to a website, the blue diamonds were actually added later to the original 4. I guess my memory isn’t so great, what a surprise. 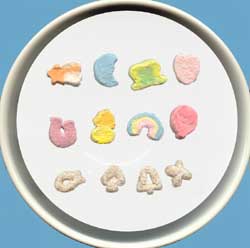 The first new marshmallows I remember being added were the purple horseshoes. Lucky, the leprechaun, got kicked in the booty and suddenly had a great idea. A purple marshmallow to represent the purple bruises on his rump. How horrible.  (Swear to Bob I’m not making this up)

Red balloons popped up when Lucky needed something to get away from the Charm stealing kids. Several additions were mostly modifications of the old ones.

What else is there?

The best explanation i have for the cereal bits, is to recommend that they were initially a part of a cereal that did not market well initially. But what do fish, spades, bells and clovers have do do with one another? As far as i can tell they are all nouns and that is about it. My guess is, that nounies, the grammatical cereal is just not a good idea for a cereal. Now if they had made it frosted nounies.. oh man that would be some good stuff!