Warning: Creating default object from empty value in /home/content/04/4371104/html/words/wp-content/themes/platform/admin/class.options.metapanel.php on line 49
 Frosted Nounies – Revisited | Words with Sox
A post for a kitty’s birthday “It’s die with a t on the end” – Garfield

First off, if you have no idea what I am talking about when I say nounie, check out the old post regarding them.  I’ll wait for you to come back.

Ok ready? When I was reposting the old page I started rummaging around the internet where I found something curious.  There are several posts on question asking sites where they try to sort out what the 5 other shapes are.  No good answers though.  Wait… 5? Of course they must be mistaken.  There’s the fish, spade, clover/X and bell.  But after diving into a box of stake lucky charms I discovered that yes Virgina there is a 5th shape.

Originally I had assumed that there was an X and broken versions of it that looked more like a 3 leaf clover.  But now I truly believe that they are not the same shape.  If you see here, there are several examples of the three leaf clover and X.  The last X was what I assumed all the clovers were.  Just a stumpy X’s.

So now what are they? Still nounies yes, but far from the potential concept of them being

related to the 4 suits in a deck of cards.  The spade thing is seeming less likely to be a spade if we’re deciding that card suits aren’t viable.  Also it doesn’t make sense for the X to represent a clover or club or whatever, because we have a real one.   So… if you call the spade a tree, then it gets interesting because now you have representations of five Christian symbols.

Since the nounies haven’t changed in all the time I’ve seen them I decided to back track and see if they in fact have always been the same.  Diving through several websites I found pictures of older boxes.  The

most comprehensive was the Lucky Charms page on www.mrbreakfast.com. After finding lots of interesting cereal related stories on there I got back to the mission at hand.  Here are the oldest boxes I can find and one that is a little less old. By the way.  I long for the day that TV finger puppet theatre comes back on the air. 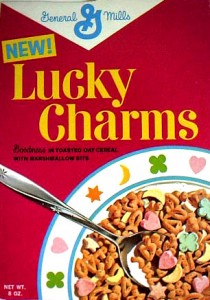 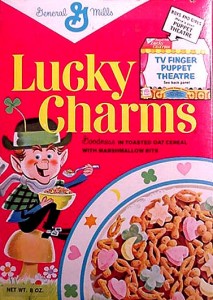 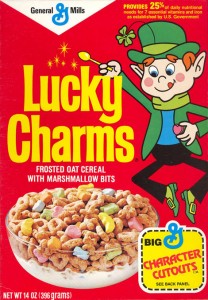 The first two have good overhead views where we see a good shot of the cereal itself.  To start out, the fish nounie is spot on for the Ichthys. More pointy and less ambiguous than today’s more pineapple style nounie for sure.

Next you can see that there were definitely two different kinds of X/clover shapes.  Green circles are marking the more lumpy clover shaped nounie.  It’s hard to tell if it’s a 4 leaf or 3.  Either way it’s definitely different considering that the X is shown as distinctly more squared off and cross like in some of the pieces.

The spade nounie is much more pointy here.  Definitely tree shaped.  I would say it was a mouse pointer but it’s a few decades off for that to be an option.  The bell on the other hand is hard to spot.  In green below it seems like there is a less pointy, and somewhat differently.. um… stumped? shape.  Don’t forget though that even in today’s mix of oat pieces these two are quite similar but are definitely different objects when you set them side by side. It’s a stretch though.  So I checked out box 3.

The third box has a good shot of some more bell like shapes.  Actually, to be fair they look a lot like ghosts from Pac Man. Perhaps they were introduced in that shape to partner with the mouse pointers.

So what is it? Who knows. The General Mills website sure doesn’t say anything helpful. The only historical descriptions of the cereal mentions that frosting was added to the oat pieces and the marshmallows were originally all white before marketing decided it should be brightly colored.  Now you could say that it’s playing off of some sort of stereotyping where Leprechaun = Irish = Catholic but personally I’m sticking to Frosted Nounies for now.  The concept of Frosted Christianities is just a little too digestively weird for me.