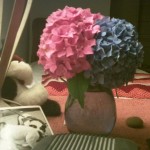 Note: I can’t really vouch for the security of the websites that I mention in this post so just keep that in mind!

I did a little survey thing online to answer the age old question “What is Your True Color Aura?“.  I filled it out once and it came up with something kind of like me.  I thought about my choices again and decided I was answering in a way that described who I thought I was.  So I took it a second time and this time I tried to fill it out based on how I actually am.  The description associated with the color was pretty much dead on in my opinion, which isn’t terribly surprising, because, well, it’s based on how I described myself in the survey.  But the interesting thing was that I’ve been called this color before.  Not with respect to an aura, but instead by someone I knew that was a Synesthete.

Ok, so what’s a Synesthete?

Synesthesia is a characteristic of some people where you associate two things together that really have no inherent connection.  Often this has to do with letters/words and numbers bringing to mind a color of some sort.  It’s not the same as if you were to see the word Christmas and think ‘Red and Green’.  More like if you see the word Vegetable and think ‘Greyish blue’ or if 18 seems like a pink number.  It’s not about the words reminding you of something, they simply ARE a color.

If you have it, you probably think that everyone thinks that way, but that’s not the case. Not everyone does though, so here’s a little checker dealie to see if you might. Synesthete Survey

What’s it to you?

Everyone’s color associates are different, so it’s not really going to match up.  But still I’m curious… for those of you out there that have Synesthesia, what color am I to you?

(I’ll tell you the color later)