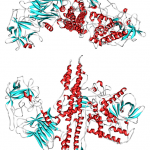 Canning is great, but be careful!

So a friend on facebook was asking about where to get pumpkin butter, a product that is typically canned (in jars of course).  Alarms went off in my head.

See, this weekend I spent a lot of time with some friends canning apple sauce.  It was a royal mess, mostly because of the volume (91 quarts). Peeling, cutting out bad parts, core, cook cook cook, strain/mill, heat, put in jars (which are sterilized, lids are too), set in a water bath canner for the right amount of time as indicated by the guide book (adjusting for altitude), cooled for 5 minutes or so in the canner with the heat and lid off, and then set aside.  A lot going on.

There are easier ways to do things yes, but it spooks me to consider them.  Often you’ll hear that you can can things just by putting the hot item (applesauce, jam, whatever), into the jar, seal it up, flip it over on it’s top, and let them sit a while.  Here’s some more options.  So much easier, yes, but terrifying for me.  Here’s the short version of why.

Critters in the jar

One of the reasons that you have to process things correctly is because if you don’t, you can create an environment where bacteria can grow. One in particular,  Clostridium botulinum is just plain nasty as it can cause Botulism.  Not sure what Botulism can do? Have you heard of Botox? The cosmetic treatment where you shoot the little critters into one’s forehead to “temporarily improve the appearance of moderate-to-severe frown lines between the eyebrows”.  It essentially works by paralyzing the area that would make you frown.

Did you get that?

Ok try instead of putting that into your forehead, you throw it down your throat.  To my best understanding the paralysis is temporary in most cases, but still.. how long do want one of your vital organs to stay still?  Seems important yeah?

It’s not just the canning process, but also the recipe.  If a recipe isn’t put together to reach a safe pH value, it can have issues even when sealed ‘right’.  Because of this it’s important not to stray from canning recipes, use bruised or diseased fruit, anything like that.  If you’re going to wing it, then you’re better off freezing it (in some cases), or just using it right away.  Most of my early canning was done with someone who was, among other things, a skilled clinical pathologist.  At first I thought she was just overcautious.  But then I realized that she was tremendously more informed and educated on the matter than I was.

It’s a safe bet that if you read a website/blog about canning (or not canning) in a certain way, there will be a lot of comments contending the validity of the approach described.  This page has well over 100! It might be tough to accept the warnings without a scientist in the kitchen with you but overall, the USDA does a lot of work on this, and personally I choose to side with them both.

Is it really that bad?

So yes, this is an oversimplification of the whole thing.  But for me, it’s not worth the risk.  Especially since I give most everything I can away as gifts.  The more I can do to make sure it’s safe the better!

But please don’t take my word on any of this as the final say on it all.  Talk to a food preparation professional or speak to someone from your local extension office!

One Response to Canning Warning