Well today is Liza’s 19th birthday and as many of you know she’s kinda the most important thing to me in the world.  It’s funny because before I got her I really didn’t like cats, or at least I didn’t see a whole lot of value in them.  I wasn’t really into dogs either but there were occasions when I was little that I thought it would be neato if I had one.  So back in 1995, my then girlfriend was working at the National Zoo Research lab.  Liza was in a study looking into reproductive type things.  Fertility drugs maybe?  The study was intended to sort some things out with big cats (lions and tigers and such) to help them get and keep babies. 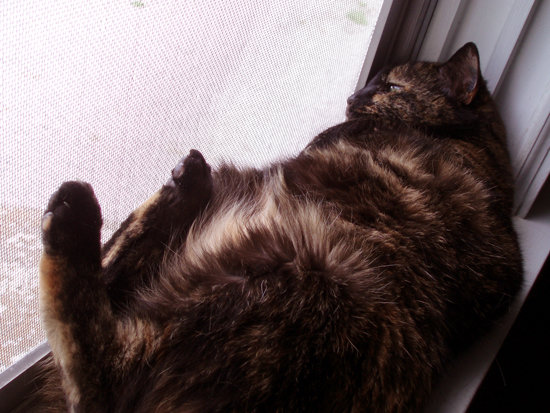 When she lived there Liza went by Maggie I think, and her designation was BDR5 (she has a tattoo in her ear).  Since the study was ending there was an opportunity to find homes for the cats before they were put into another study.  Liza had an out if she could find a home.  Kara asked me if I knew anyone that could take a cat, and I said I would.  She was pretty surprised to hear that and I just said that it doesn’t make sense to have her stay in a lab if there’s something I can do to help her out.

So Kara chose Liza and brought her to Blacksburg.  It was my first year out of the dorms and essentially living on my own.  Well on my own with a roommate.  She was 2 at the time.  When she arrived she had no interest in getting out of her carrier.  I tried to lure her out with food but she wouldn’t take it out of my hand.  “Cat’s don’t do that” Kara told me.  But of course I know that’s not true since eating out of my hand became one of Liza’s tricks as in later years she would stand up on her back legs and take the food right out of my fingers.  Liza had never been on carpet before.  She hit behind the toilet for at least a week.  The flushing didn’t seem to bother her at all. 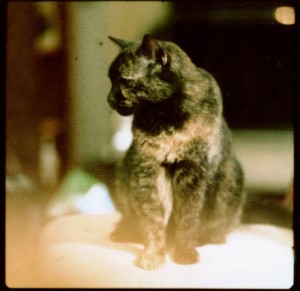 Soon after I learned that Liza was quite talkative.  Quite noisy actually.  Kara had told me that she chose Liza because she was always well behaved when they had to give her shots, or draw blood and things like that.  What she didn’t tell me until years later was that she also chose Liza because she was really vocal.  You see, we had recently stopped dating.  So of course she wanted to punish me a little for being a mean breaker upper.

But that’s ok.  After a while I learned that Liza would come if you called her name.  She would show up faster if you made a clicking noise (like you would if you were disappointed) three times.  She loved to play with paper balls and even learned to play fetch.  Her stuffed fish was a favorite too though the stuffed mouse wasn’t so much appreciated. A scratching post made out of rope and a traffic cone was a good buddy too.

Now she wasn’t all peaches and cream.  She was a super pest about paper.  She chewed on it, scratched at it, and crumpled it by sleeping on it.  You’d think that this would mean I would clean it up.  Instead I would throw clothes on top of it.  There were lots of piles of paper with clothes on top. There’s a whole section of my website attributed to finding a nail clipper that was buried under one.

Tuna fish was a super treat though it always made her tear up.  Cheese beats everything though.  It got to the point that any time she saw someone go near the microwave or smelled tacos cooking, she’d be sitting by your side begging.  Ok.  Maybe milk was better than cheese.  If you ate a bowl of cereal she’d yell at you until you finished and let her get a couple of laps in.

She’s a older now.  There’s not as much playing anymore.  Mostly naps, and talking.  Still loves cheese and milk and treats.  She can’t really hear much.  Still loves her belly petted.  Still likes to eat out of my hand.  Still scoops the food out of the bowl before eating it.  More trips to the vet and lots more worry on my part.

I could type for days and days about her.

So happy birthday to the cat so sweet that even people with allergies would pet her.  The one that crawls up in bed with me when I am sick.  The one who’s picture is the start up screen on my GPS so I remember my reason to come home.  The one thing that has been a part of my daily life for longer than anything else. The reason tears fill my eyes while I type this. I don’t know who I would be without you. 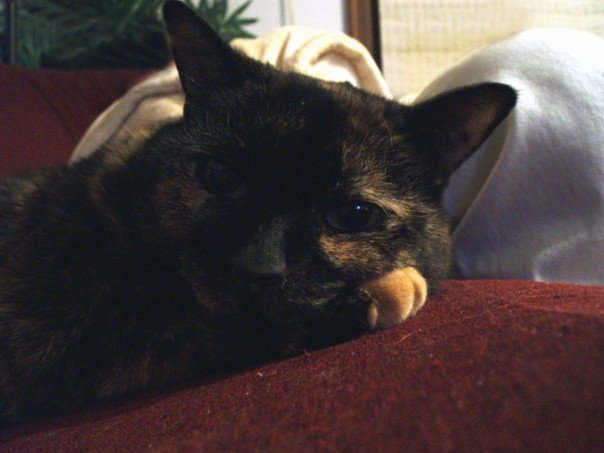 Happy birthday to my little girl.